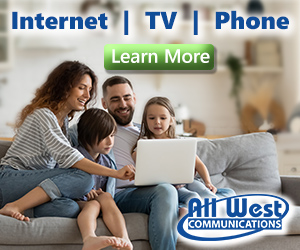 EVANSTON — The 31st annual Bear River Mountain Man Rendezvous was held at the Bear River State Park the weekend of Aug. 24-26, and the event again provided attendees with shopping opportunities, multiple skill challenges and a whole lot of fun.

Ian Siegismund of Evanston spent the weekend at the rendezvous dressed in mountain man attire, participating in challenges, doing some Dutch oven cooking and camping with his fellow rendezvous enthusiasts.

Siegismund came in second in this year’s Mountain Man Walk event, which requires participants to complete several challenges including trap setting, rifle and pistol shooting, tomahawk throwing and knife sticking and fire starting, among others. He said it was the third time he’d competed in the walk, although only his second time to compete as an adult.

The young man, a recent graduate of Evanston High School, said he has been shooting since a young age, first using a gun built by his grandfather. Ian’s mom, Jane Siegismund, said the gun was nearly as big as Ian when he first started.

In addition to the Mountain Man Walk, Siegismund said he competes in events like fun shoots in which competitors shoot at bowling pins or try to place shots to cut boards in half. He also does individual tomahawk throw and knife stick events, as well as archery. He spends the weekend at the rendezvous camping and cooking. Jane said the tent he uses was purchased at the Fort Bridger Rendezvous and was used at the 150th re-enactment of Gettysburg prior to the Siegismund purchase.

Ian just started Dutch oven cooking this year and said he had just gotten his dinner started on Friday evening when the rain and hail moved in and definitely added a challenge to his cooking. He said he was thankful when fellow mountain man Mike Bird showed up to share a few cooking tips. Thankfully the weather seemed to cooperate the rest of the weekend.

Ian said he really enjoys spending the weekend camping, sitting around the campfire and listening to music and more.

In addition to events like the ones Siegismund participates in, other weekend events include the frying pan toss and primitive demonstrations, as well as kids’ games and candy cannon.

Local 7-month-old killed in I-84 rollover